Elders invited to share stories of culture and land-based learning 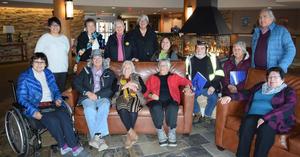 As we explore ways to incorporate culture-based curriculum into our schools, we invited Elders to share their own education stories during a series of meetings this year. Read what some had to say.

March 19, 2021 — As part of its goal to incorporate culture-based curriculum into the infrastructure of schools on First Nations, the First Nations with Schools Collective invited Elders to share their education stories with members through a series of meetings during the spring of 2021.

During the first two meetings, held over Zoom video-conference in March, Elders from three First Nations — Six Nations of the Grand River, Wiikwemkong and Haisla Nation — shared memories and cultural teachings that illustrated how they learned traditional ways of their communities.

“In summer, we picked every fruit and vegetable there was,” said Audrey Powless of Six Nations, who also spoke about the importance of The Great Law. “Our whole life we spent watching, listening and learning. . . . How to grow corn, how to grow a garden, identification of medicines.  Those values became who we are.”

Joe Starr of Haisla Nation demonstrated how it is possible to build a 21st century education program in a way that the community is agreeable to, by sharing stories of how he teaches students about the cycles of the moon and the way they are connected to that patterns of herring and oolichan fish.

And Brian Peltier of Wiikwemkong First Nation shared many examples about how culture is being passed on to students through the school’s land-based learning program in the ways that parents and grandparents have traditionally passed on knowledge.

The powerful stories reinforce the importance of language and tradition in Anishinaabe, Haudenosaunee and Haisla communities, and provide evidence that culture and land-based learning is vital to the education of youth on First Nations.

“It was clear from these conversations, that curriculum from an Indigenous lens is a communal undertaking that takes its lead from nature, the geography and the people’s movement within the ecosystem — all of which is coded in the language,” said Leslee White-Eye, structural readiness co-ordinator for FNWSC.

“The Elder Voices forums will offer valuable insight into the many levels of learning involved in learning a traditional skill based in community culture."