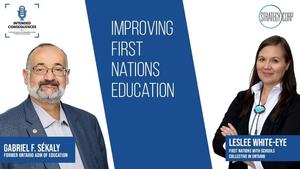 By Jennifer O'Brien
For FNWSC

As part of its goal to see First Nations attain full jurisdiction and control of on-reserve First Nation schooling, the First Nations with Schools Collective (FNWSC) has been working with StrategyCorp Institute, which provides advisory services on government relations.

In May, StrategyCorp published a report on the “achievement gap” between First Nations and non-First Nations students in Canada, with three recommendations on what the federal government should do to address the inequities and improve outcomes for First Nation students now.

That report — which addresses the education-related trauma and ongoing detrimental effects of colonialism and Canada’s residential schooling system on First Nations — supports a 1972 finding of the Assembly of First Nations, that the cornerstone of education success is First Nation control of First Nation education. StrategyCorp recommendations to
the Government of Canada

During the podcast, moderated by the firm’s Mitchell Davidson, they covered issues that are critical to the work of the FNWSC.  Please check out this important conversation and share with people in your network.

Only have a few minutes? Keep reading to see excerpts of what Leslee and Gabriel had to say about some critical issues facing First Nations education and what is needed to improve outcomes for students.

A history of racism: Why communities need more than parity to achieve equity

Gabriel: Equal funding with provincial systems will never be enough to overcome the history of systemic shortcomings and racism that was built into the education systems in terms of on-reserve education. [What’s needed is] parity plus plus, but it’s equitable outcomes.

Historically there has been a disincentive for education. Not that long ago, if a First Nation citizen went to university… they weren’t counted on the rolls of the First Nation. So the government was saying, ‘if you get an education, we’re going to cut you off.’ That is the legacy we are working with to overcome these huge inequities in education. (For more on the impact of colonial policies, such as the residential school system, on First Nation education, see the report)

The control of the funding should be in the hands of individual First Nations. A fly-in community may require additional funding to attract teachers to be there. Whereas a community in Southwestern Ontario may not. That to me is very important. How we define that and how the outcome-based approach . . . is put together.

But the box that the First Nation education leaders are dealing with doesn’t include things like:

It’s more than turning the lights on and running classrooms in a First Nation school.

On how the funding formula can be addressed

Gabriel: A lot of [funding] formulas that exist in Canada or around the world are input-based. So many dollars per teacher or per textbook. It’s really not focused on outcome, on ‘What do we want our student to achieve?’ And that’s what we need to move to: ‘What does it take to achieve this outcome that is defined by the First Nation.’

People in the First Nation system are doing a damn fine good job with what they have, but much more is needed. It is a difficult situation.

Leslee: Gabe just described a whole number of communities that live remotely, that are fly-in. When you try to apply a Grants For Student Needs model …. you already know it’s not going to work. We’re facing not only an approach that is similar to the approaches they’ve always taken — which is they lead and define the box and you decide whether you’re going to join in.

It’s so incremental. You get one per-cent, two per-cent change over three, four or five years. The types of changes we need to be doing in our communities at the community level, we could be doing those now if the incremental way of doing things is dropped.

Ontario’s Grants for Student Needs (GSN) funding model is
largely based on student enrollment numbers and meant to cover
operating costs, which can include teacher salaries. It does not
include capital or infrastructure costs.

Leslee: What is taken for granted in the application of the Grants for Student Needs model on First Nation funding formulas is that the Canadian system for education has taken well over 170 years to develop. Ontario only just got into its own curriculum development in the last 35-40 years… It’s taken Canada that long to get to a space where they have a shared data infrastructure — a system with which to collect data for the Ministry of Education — and make solid program decisions. (First Nations) need those resources to develop those basic elements of any education system, and yet we keep getting pulled into the discussion around the delivery of programming within a school… ‘how many pencils do you need, how much paper do you need,’… That’s administering a school, that’s not running a system.

We need large scale flexible deliberation spaces with the federal government to get to the bottom line with resources that are going to make the change needed within one or two years.

Barriers to Funding Parity Plus, introduced in 1972 by the Assembly of First Nations:

Leslee: Lack of political will, lack of funding and a mechanism that’s so outdated in an approach that Indigenous Services Canada and the Crown Indigenous Relations Department [and Northern Affairs Canada] hasn’t been able to overcome. The bureaucracy they’ve over there created does not know how to create the legislative decision-making space, or it’s the will of decision makers in terms of cabinet, to get at the funding needed to make these types of decisions. Ultimately, it comes down to how you interpret section 35 of the Constitution.

Leslee: The Collective has always situated jurisdiction as a key component of these discussions. We completely understand and know how to articulate what our education system should look like.

Now, the matter is to sit down with the federal government and get at the negotiations to get to the resources that are needed. Just as the same resources are received by mainstream public systems all across Canada. We don’t have that kind of comparable amount of funding for the duties that the Ministry of Education undertakes, and the school boards undertake and the principals and classrooms undertake in our community.

On what else it will take to move the conversation forward: New policies

Gabriel: We need allies and we need the political will to do it.

The federal government is set in a certain box, which is a program box where everything has to be controlled by Ottawa. It takes a lot to permeate a whole organization. ‘We’ve always done it that way,’… that’s not an answer, there are better ways to think about other things. It’s an inertia in terms of bureaucracy because they are set in a certain mindset and can’t get out of it.

Think about how many communities have boil water advisories. If this happened outside a First Nation reserve, there would be action. Yet there is inaction and it’s like 25 years for some communities. There are over 600 First Nations in Canada and an enormous amount of energy that as a country we can all work together to make our society more equal and better and we’re not doing it. That frustrates me.

Leslee: The [First Nation education directors] are just incredible leaders that have led and are leading in isolation — in a single position running the entire education system for their communities, which usually runs anywhere from early years all the way to adult learning to post-secondary. That’s far beyond what a typical school board director and would do with no additional staff. All of these leaders are working really hard to create the environment for exceptional decisions to be made with very limited resources.

What the federal government needs to do… is to really get at the (human resources) piece that exists in communities, that we can access if given the funding we need to create really robust strong education departments that have a policy advisor, program instructional consultants,  immersion coordinators skilled in their craft. These are things school boards take for granted and these are things that are not funded at the local First Nation community level.

And yet we’re told the government cares about land based learning and cares about culture identity and history, but all of that has to be built on the ground nand that takes curriculum developers. It’s that kind of conversation the FNWSC is going to go wholeheartedly into with willing participants and partners. We hope the federal government can commit to those conversations.

On the urgency of the situation

Gabe: The time is ticking. We can’t wait 10 years. How many Indigenous languages have been lost worldwide? You have to preserve that…

The political level needs to say to the public service, ‘You get this done…  If there are roadblocks at the bureaucratic level at the federal government because they can’t get out of their box, it has to be at the higher level where the minister and the minister’s staff say ‘This is important. . . we don’t want the old ways. We want it done by this timeline.’

That works. I’ve seen it and I’ve lived it.

A case for action: Why First Nation education is a critical investment

Leslee: If you want to solve a lot of social challenges facing Indigenous people in Canada, you’re going to do it by education. It’s a far better investment and use of public funds to invest in something that’s going to prevent incarceration rates, mental health crises, drug addiction, the representation of Indigenous people in the courts. . . the list goes on and on.

We can do it together between the First Nation governments and the federal government.

We’ve got the skills and know how to do it and the Collective is an example of that. Everyone on this team is well-versed in the work of education. We’ve got the  answers, we just need to get to a table that get to the places where there is some commitment of substantial resources that are stable and predictable.