The case for bringing in speakers from other communities 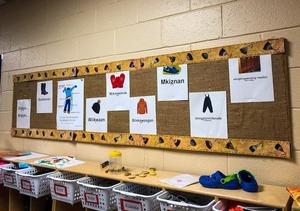 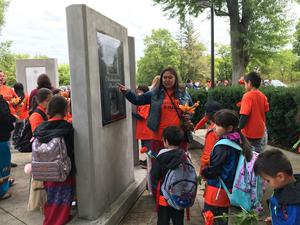 Chippewas of the Thames First Nation (COTTFN) is located in southwestern Ont., about a 20-minute drive from London. The First Nation is close to Highway 401 which is the main roadway from the U.S. border at Detroit to Toronto.

Like many First Nations, COTTFN does not have any fluent Anishinaabemowin speakers. And like many, it is committed to bringing back the language into the community, despite the challenges it faces today.

Mt. Elgin Residential school —  which operated within the First Nation’s territory until 1946, then as an ‘Indian Day School’ until it was burned down in the 1980s —  played a huge role in the loss of culture and language in the community.

Apart from COVID-19 affecting classroom immersion, listed below are some Anishinaabemowin revitalization initiatives and challenges we have faced at COTTFN.

*Top photo: Signs in the Enji Maajtaawaad Early Years Centre have photos of clothing items with the Anishinaabemowin. Second: Language teacher Betsy Kechego with an immersion class at COTTFN monument honoring the children that attended the Mt. Elgin Residential school.

Since 2006, COTTFN has held community Anishinaabemowin classes. Betsy Kechego began leading the classes with the help of elder Jennie Blackbird from Bkejwanong (Walpole Island). Before being interrupted by the COVID-19 pandemic, classes started every September and ran once or twice a week until around June. Students also received funding to attend the Anishinaabemowin-Teg language conference which is held every March in Sault Ste. Marie, Mich.

Barriers and challenges: Because the classes were open to the community, student attendance was inconsistent. Due to personal situations, students would sometimes attend for a few weeks, then be away for a few weeks. As the classes are held in the evenings, some people expressed that they weren’t able to make all of them because of other commitments. At COTTFN we don’t have a place for community members to use the language in a social way apart from formal classes. We do not have a place for us to go and listen to Elders speak to each other in the language, simply because we do not have elders that speak Anishinaabemowin.

COTTFN’s Enji Maajtaawaad (Where they start) Early Years centre has been trying to implement immersion into daily programming since 2016. The idea was to have a language speaker in each of the centre’s four rooms: the baby room, toddler room and the two pre-school rooms. Each language speaker was to influence and encourage the Early Childhood Educators (ECEs) into using Anishinaabemowin throughout the day as the regular way of communication.

In September 2017 to August 2018, each of the rooms had a language speaker. Since then a couple speakers have left and a couple have changed roles within the centre. The goal now is to teach ECEs as much language as possible while encouraging them to use as much language as they’re comfortable with throughout the day.

Barriers and challenges: Not all of the ECEs are passionate learners of Anishinaabemowin, although there are a few that are determined to learn. It can be challenging to motivate employees to pick up a language that they’re not familiar with and for them to be self-motivated to speak it daily within their employment.

Antler River Elementary School (ARES) has also been attempting to implement immersion as the medium of instruction for the school beginning with junior/senior kindergarten. In the 2018-19 school year, ARES had three Anishinaabemowin teachers that were the lead teachers in two JK/SK rooms and the Grade 1 room. The school has been as supportive as possible in helping implement immersion with the limited resources that we have in the community.

The rest of the teachers in the school were also given the option to take two language classes per week — one after school and one during lunch hour. The classes aimed to help teachers learn basic vocabulary they could use within their classrooms.

Barriers and challenges: The days start in English, since the classes are housed in the main on-reserve school which has regular English-language programming and starts with the morning announcements broadcast throughout the school in English. There are teacher assistants in the room who are not fluent in Anishinaabemowin. So the children hear English from at least one other person in the room throughout the day. Also, during teacher prep time and lunches, the kids are led by other teachers or assistants who only speak English. This allows the children to feel they can always rely on English to communicate.

All three teachers from the 2018-19 school year have left. Two moved back to teach in their own communities and one was elected into Chief and Council.

The main challenge to implementing Anishinaabemowin immersion at Chippewas of the Thames is the lack of fluent speakers or proficient second-language speakers that are available to teach. For both Enji Maajtaawaad and Antler River Elementary School, there have been job postings for Anishinaabemowin speakers/teachers that just did not have a response. The majority of language teachers we have had/have, have come from different communities and some have moved back to their home communities to teach.

Anishinaabemowin revitalization is essential to this community. The leadership of COTTFN understands the commitment needed to help create Anishinaabemowin speakers and there now needs to be a strategy created around retaining speakers from other areas and creating new speakers who want to pass on the language to the next generations of Anishinaabe people.