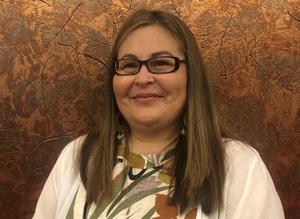 This interview is part an ongoing FNWSC series to showcase the excellence, expertise and experience of the education champions leading the schooling & lifelong-learning systems in our communities.

Tell us about your work in First Nations’ education.

Before this, I was a teacher for 21 years, teaching K-12 in Indigenous communities: Wiikwemkoong, Big Trout Lake, Birch Island, Curve Lake, Arrowland … I wanted different experiences and to see other communities and what their education was like. Then I moved back home (to Wiikwemkoong) and started at the high school as the arts teacher.

I believed I had to leave the reserve to gain experience so I could bring new ideas and experiences back and make it richer.

What do you want for the children in your education system?

As an educator, what does lifelong learning look like?

As an arts teacher, I was also a learner with the students. I made connections in my own community by bringing in Elders for activities, which helped build capacity in the school. We had some Elders come in who are really good quillers and they taught us from start to finish. I learned with the students. Now, when I see a dead porcupine on the road, I harvest it.

It was the same with the deer hides. My students learned how to de-flesh, de-hair the hides. We feasted … and they made drums and took them home.

That’s what I envision for M’Chiigeeng as well. To have the education be more specific to the way Indigenous people learn, using Indigenous pedagogy and methodologies. But it’s going to take time.

Can you share a story that highlights how Indigenous teachings make a difference?

I ran an outdoor education program based in the community, and after one of my classes, I had a Grade 10 student come to me and tell me that the class had saved her life. She said she had made lots of (suicide) attempts before … And I hadn’t known. I didn’t even know she was struggling.

But that class – the arts, the culture, the land-based – kept her going. She said having those little challenges and being able to meet those challenges helped.

That’s the thing. You don’t know. I’ve lost kids to suicide in the different communities.

You never know who needs help. It’s not obvious … Students might not even really talk to you. In some northern communities, they have their hood over their head all the time, but when they are out on the land, they are leading the class.

This young lady ended up going on in school. And she was hired as a special education assistant.

What is the greatest challenge in implementing Indigenous pedagogy?

People’s mindsets. People were brought up in a colonized system. It’s hard to change that.

It can even be hard for teachers to make curriculum connections with the culture and land-based. People say they get it, but when they have to implement it, it’s hard.

But I believe we are moving toward the same goal. Everybody is getting there in their own way depending on where their community is at. As a director of Education, you have to look at the history of their education system and see why certain decisions were made. It’s a lot of research and talking and visiting with people to get the whole picture of what’s going on in the community.

I could have these big ideas, but if the community isn’t ready, it’ll never get there.

Staffing is huge. It’s a real challenge. We actually have a very competitive pay grid now, as a result of the collective. We even went above.

What is a successful education initiative you have been involved with?

Our elementary school recently partnered with the health centre in M’Chigeeng to share the teaching lodge. The entire school came out and our elders, Josh-Eshkawkogan and Geraldine Ense-McGregor did fire teachings and talked to students about the lodge. We want to build our own teaching lodge at the school, but in the meantime, we entered into this partnership and now the students are learning and they have mentors.

We’re trying to build up the land-based and language. We are also bringing back the circles and talking in circles in a good way to build capacity.

In what way has FNWSC helped you as education director?

The collective has been very supportive and helped me understand some of the historical and political pieces that I didn’t know about as a teacher, and helped me realize why people make decisions based on budget and funding. It has also helped me network and to realize other communities are having the same struggles and have the same goals – and we’re in this together.