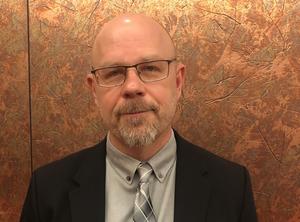 This interview is part an ongoing FNWSC series to showcase the excellence, expertise and experience of the education champions leading the schooling & lifelong-learning systems in our communities.

Tell us about your journey in First Nations’ education.

I’m originally from Windsor, Ontario and I went to teacher’s college at University of Windsor. It was about three weeks into the September after I graduated when a friend who was teaching at Pikangikum First Nation informed the current principal that I could potentially fill their Grade 7 teaching vacancy.  The Pikangikum Principal called, did a quick phone interview, and then immediately offered the job.  I wanted more time to think about it but he insisted that I make a decision that moment.  I decided to take the leap and utilize my degrees in education (I had been in management positions in both the restaurant and movie industries to that point) and headed 22 hours north to Pikangikum.

Pikangikum First Nation is a remote, fly-in community. I taught Grade 7 my first year. I loved the students, but initially struggled with the isolation and being so far away from family.  That all changed when I met my wife Judy, who is from Pikangikum, and was a Grade 2 teacher.   She became the love of my life, and opened the door for me to really get to know the community and become actively involved.

After that year, I taught Grade 5 for two years, then worked as vice principal before I became principal of their Kindergarten to Grade 12 school, which was an amazing experience serving approximately 750 students. Before that, there had been a lot of turnover, every two years or so. I stayed seven years in the role as principal (I spent a decade in total in Pikangikum), felt I helped build a lot of internal capacity and so my wife and I thought it was in a good place and we wanted to try something new.

We applied to the Wiikwemkoong Board of Education. My wife was offered a permanent contract immediately to teach Kindergarten due to her fluency in both Ojibway and English.  I was hired to teach Grade 5, and just before the school year started, I was asked to take on the role as high school principal. It was a little scary because the high school had been around for 14 years, and had already had 11 or 12 principals.

But then I got there, and I was like, why would anybody ever want to leave this ? I loved it!

I was in that role for 8 years.  After that I worked as the First Nation Student Success Principal, then as the Systems Principal (Superintendent role), which finally led to my current role as the WBE’s Kinoomaagewi Gimaa (Director of Education) for approximately the last year and a half.  I am heading into my 14th year serving Wiikwemkoong, and my 22nd year in total in school/system education leadership.

How are you working to develop capacity at Wiikwemkoong board of education?

We have to build in succession planning to develop internal capacity from within the organization to help ensure everyone has a shared understanding of the vision and mission and strives to achieve it.

Some of the things we’ve done: We issued a call-out asking all staff if they would be interested in joining a Future Leaders program, then provided leadership learning and encouraged program members to apply for future leadership positions.

We also identified external leadership learning and brought in consultants as well as sent staff members out for professional development.

We are seeing results. This is the first time in a few decades that all our principals and all but one vice-principal are from the community. We want to keep building from within.

Why is it important to have teachers and principals from the community?

What are the main challenges the board of education faces?

One is that we are trying to eliminate barriers to get a facility that will help us promote and teach the Skilled Trades, which is part of Chief and Council’s strategic plan. The students are engaged in Trades learning in this substandard little garage when they really need a proper facility.

The other challenge is securing education funding for students over 21 years of age who don’t have their high school diploma. Previously, we had cobbled together funding from various sources run a program, but those funding sources were discontinued.

Unfortunately, our core funding is generated by our Kindergarten to Grade 12 core nominal roll funding and should not be diverted to students over 21.

It’s a gap in the community. I keep pushing for students over 21 to also be funded on a  nominal roll basis. Once that’s the case, we can work with Ontario Works to get a full-fledged adult education program back.

When we had the program, we had an adult education teacher, Pete Charbonneau, who had approximately 15-to-20 GED (general education diploma) graduates every year. His first graduate was in her 60s. Her son graduated soon after her.  Some of these graduates went on to post-secondary education and even the military.

Is there a story that shows the benefit FN education has in a community?

We had an interdisciplinary course centred around building a large 12-passenger canoe from scratch. There were Anishinaabe teachings involved and it generated a sense of pride with our students. During that course you couldn’t even get a lot of the students away from the class, even at lunchtime. They wanted to keep continuing on that project.

It was part of our land-based learning and the way the students engaged and responded to the course showed how authentic, culturally relevant learning opportunities enable educators to be creative. The students in that course didn’t have an exam, but their final summative project for assessment was taking the canoe out on an excursion across their own traditional waters.

They demonstrated their knowledge through application and came away understanding that traditional craft and with an expanded knowledge of their traditional territories.

What do you want for future generations of Wiikwemkoong students?

Shanna Peltier (who is part of the FNWSC Research Circle) was in the provincial system, but she came home to finish her high school education. She went on, got her masters at University of Toronto and she’s going on to her doctorate. She lives in Toronto, but she comes home all the time and you can tell she’s just as comfortable on Yonge and Eglington in Toronto as she is coming home to Wiikwemkoong to go hunting in the bush for moose (skills her father and mother passed on to her that she continues with to this day.)

That’s what I want for all the students … for them to know their identity so they can thrive anywhere they want to be while pursuing any next step in life they want to pursue. Land-based education grounds students in their identity, and that can help them go on to become doctors and lawyers, and so on.

I want them to flourish and be comfortable in any context they encounter.

How does being part of this collective help you in your work?

You can’t discount the focus and the persistence of Leslee White-Eye in moving these critical things forward. If she didn’t keep pushing forward on jurisdiction and parity-plus funding, our efforts would be significantly stalled. There is clarity now. We are talking about things that I don’t think we would’ve been ready for without FNWSC.

FNWSC is very particular on securing high-quality consultants to help with work on self-jurisdiction and funding formulas. So, as members, we benefit from being part of the collective without having to dig deep into our own education budget to get consultants in for this specific work.

The other thing is that it creates a path for networking between communities and for sharing ideas and projects.  The lines of communication are always open and recent so we can easily call each other and ask questions when we have an issue to navigate and solve.